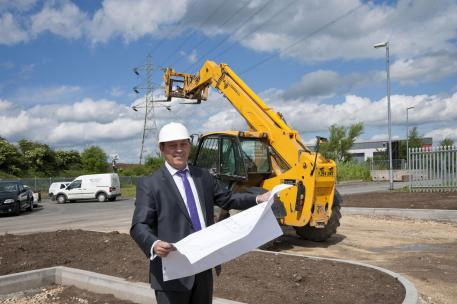 Construction work has started on a new business park in York with advanced stage talks already underway with potential occupants. Developers have begun to clear the site in preparation for building work on The Rose Centre industrial and warehouse scheme, forming an extension to York Business Park near Poppleton. The Rose Centre is being developed by Dream Developments, a York-based developer that acquired the three-acre site from F&C REIT. The first phase of the development, which is due for completion in September, will see the construction of eight units, ranging in size from 1,225 sq ft to 3,060 sq ft. Garry Barker, managing director of DREAM Developments, added: “Early interest in The Rose Centre has been really encouraging and the commencement of work at the site is great news for York. We have a number of parties interested in the units and are at an advanced stage with a couple of them.” The scheme is being marketed by GVA, a national independent commercial property adviser, and York-based Flanagan James Property Consultants offering the units for sale or to let. Richard Flanagan, director of Flanagan James, said: “The Rose Centre will appeal to a really broad spectrum of businesses. It will fill a gap for grow on space, for those businesses that set up either at home or in serviced accommodation and are ready for bigger things. It will give them their first foothold on the commercial property ladder. “It plugs a gap in the market, and units are available to buy freehold which is very rare. Here the primary driver is to sell these units to locally based businesses or indeed to businesses outside the area looking to establish a base here in the city.”