Yorkshire developer S Harrison has agreed terms to acquire a former Wesleyan Chapel on Clarence Street in York which it plans to convert into apartments and a Sainsbury’s convenience store.

York Teaching Hospitals NHS Foundation Trust has finalised legal documentation with Harrison for the sale of the 1833 Grade II listed chapel, for an undisclosed sum. The 8750sqft building which also features a more recent two storey extension to the rear had been used by the Trust as a training centre with additional offices and storage facilities since it was acquired by them in the 1970s.

S Harrison now plans a £5m programme to extend and convert the building, creating 26 self-contained apartments on the upper floors and a 5000sqft Sainsbury’s convenience store on the ground floor. “We are pleased to be in contract with Sainsbury’s for the ground floor retail space,” says S Harrison director David Clancy. 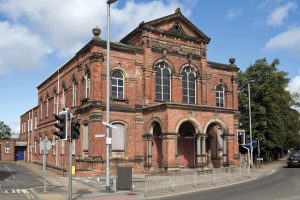 Within half a mile of the Minster, the chapel is in a prominent position at the junction of Clarence St, Wigginton Rd and Haxby Rd, next to the York and District Hospital. If planners approve Harrison’s proposal, it will provide a high profile store for Sainsbury’s serving visitors to the hospital and residents in the Groves area of the city.

Says Sainsbury’s acquisition manager Paul Sellers: “We are always looking for new locations for our convenience stores and are delighted to be working with S Harrison to open a store at this location. Our store will provide 20-25 full and part time jobs for local people, increase choice and provide a convenient place for people to pop into and top up their shopping.”

Says York Teaching Hospital’s James Hayward, programme director – capital: “The chapel has served us well for the past three decades but is now surplus to our requirements. We are delighted that a buyer has come forward who will ensure that the building continues to serve the community offering much needed retail provision and new homes, possibly for staff from the hospital itself and we can reinvest the money into improving healthcare services for the city.”

York property agent Flanagan James and the Harrogate office of solicitors Hempsons acted for the Trust in the deal. S Harrison was advised by Leeds lawyers Chadwick Lawrence.

Richard Flanagan of Flanagan James Property Consultants adds: “We conducted a comprehensive marketing exercise which produced significant interest in this exciting opportunity. After detailed consideration of numerous offers, Harrison was selected as the preferred purchaser, and I am confident that with their track record they will deliver a quality redevelopment of this landmark building.”

This is Harrison’s third major site acquisition in Yorkshire in the past three months. In September it bought Hunter House in Goodramgate and has already submitted plans for a residential conversion. In October the company bought a high profile development site close to Leeds city centre. Harrison announced impressive results for 2013 and is using its significant cash reserves to bring forward new schemes in Yorkshire and beyond. Earlier this year the developer made its first acquisition in Scotland where it plans to build student accommodation and retail units in Edinburgh’s New Town.

Harrison plans to submit an application for the renovation and conversion in early 2015. If the scheme is approved, work on site will start in summer 2015, with the new Sainsbury’s store opening in early 2016 when the apartments will also be completed.

In 1884 there were 261 members in the Wesleyan Methodists Society and on 13 August of that year a larger chapel was opened at the junction of Clarence Street and Wigginton Road and became known as THE GROVES CHAPEL. The chapel was rectangular and built of red brick; there is a square porch with a balustrade supported by four granite pillars and the arched lights are decorated with stonework. The architect was W. J. Morley of Bradford.

The original building cost £5,721 and there is accommodation for 800 persons. In 1888 an organ was installed at a cost of £450 and in 1894 classrooms were added at the rear of the chapel. After The Groves Chapel was opened, Brook Street Chapel continued to be used as a Sunday school and day school; the day school was closed in 1890. In 1944 the building was sold for £4,000 to the Governors of Archbishop Holgate’s School. The Groves Chapel was still in use in 1955 and formed part of Clifton Circuit.